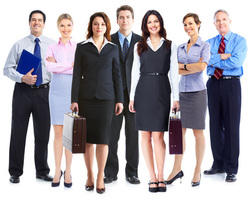 This story will smack of conceit.  It merely illustrates luck.  Or, perhaps, the luck that showing up brings.

I wandered into the Fels Institute of Government at the University of Pennsylvania. I was starting my third year at Penn Law School and was merely looking to take a class I’d find more interesting than another legal course.

An older man with a scraggly beard saw me enter.  He approached me about my purpose.  I told him.  He asked me a few more questions about my background and then asked me to sit down for a conversation.  I did not ask who he was, but he struck me as a true character so I agreed.   Soon enough, we were having a lively conversation.   During the midst of our discussion, he introduced himself as Dr. James Spady, the Dean of the Fels Institute.  He then asked if I would come back tomorrow to continue the conversation and so he could convince me to enroll in his school.  I had no particular interest in paying for another graduate degree.  But, because we had such a great discussion, I agreed to show up again.

After our conversation the next day, Dr. Spady offered me a full scholarship.  I was able to get a dual JD-MGA degree, which meant that I could take half of my required third year law school courses at the far more interesting Fels Institute.  The education itself was incredible.  Dr. Spady proved to be the best professor I ever had and I met a couple of my closest friends in life at Fels. Further, having a graduate degree in government proved to be essential when, years later, I became an adjunct college professor.  Essentially, all sorts of great things flowed from my wandering into the Fels building.

I write this self-congratulatory story with great self-consciousness.  But, I want to be clear that I view this story as one of luck and, perhaps more accurately, how showing up can lead to luck.  I am quite certain that I didn’t say anything that was worthy of admission, let alone a graduate school scholarship.

Here’s what happened: Dr. Spady had a law degree from Columbia.  Despite the fact that he also earned two doctorates from Harvard, he believed that the brightest people he ever met were those from his law school days.  For that reason, he was very biased towards having more law students join his program.  He was from New Jersey.  So was I.  While he wasn’t ethnic, he liked that I was, since he was sick of dealing with “these Ivy League snots from the Mayflower.”  He liked that I was interested in public service, as he had served as the Chief of Staff for the Mayor of New York City and also for the Governor of New Jersey.  Essentially, he was predisposed towards liking someone with my profile.

I got very lucky that I showed up at the time the Dr. Spady was available, that I had some traits that he was biased to like, and that our personalities clicked.  But, I suppose it was not only luck. I had shown up.  By going to the Fels Institute the first day and agreeing to show up the second day, I placed myself in a situation that led to a highly fortunate series of events.

If you are building your career, here’s the lesson. By putting yourself out there, be it for a networking event, informational interview, or night class, you might similarly find great things. In my story, I know that I did nothing special.  But, then again, sometimes, showing up is all that is required for something special to happen.