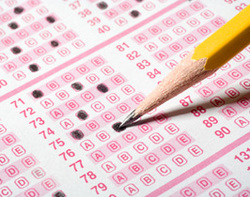 Those who have been frustrated by career tests are usually those who are looking for the tests to provide the “answer” to what they should for a career. No such test can do so. The tests are not end points, but rather starting points in helping you gather intrapersonal career wisdom.

Myers-Briggs is generally viewed as the most accepted and used career personality profiling tool. When used in conjunction with proper guidance, the test is absolutely outstanding. When used without guidance, the test will be yield interesting, but ultimately, frustratingly useless results.

That someone is an INFP in Myer-Briggs parlance means nothing without context. The data needs to be converted to helpful information. Otherwise, the label Introverted iNtuitive Feeling Perceiving is nonsensical.

Those who are labeled “introverted” in Myers-Briggs terms draw energy from thoughts and feelings.

Those who are labeled “intuitive” in Myers-Briggs terms draw in information through interpreting meanings and patterns.

Those who are labeled “feeling” in Myers-Briggs terms make decisions based on personal concerns.

Those who are labeled “perceivers” in Myers-Briggs terms are open and flexible in dealing with time and decisions.

Collectively, and depending on how pronounced these preferences are within the Myer-Briggs methodology, INFPs are individualists and idealists.

A college junior who I will call “Sean” came in for career counseling. He was studying business or, more specifically, finance with the intention of gaining entry to a large corporate organization. He found himself miserable as he was interviewing for summer internships and envisioning a career in the business world.

As Sean walked in the doors of stodgy corporate behemoths, he felt ill at ease. He came to me because he was getting depressed about a career in corporate America. This surprised people who knew him superficially. He looked, dressed, and acted in a conventional manner. He came from a suburban, button-up, Republican family. He had attended an all boys Catholic school in Middletown, CT and now attended a college that had a lot of conventional, preppy types. He certainly looked like he would fit in this group. Nothing, at first glance, gave the impression that he was anything but as he appeared: a straight-laced, conventional, organizational type.

Sean’s Myers-Briggs came back as an INFP. INFPs are among the least suited Myers-Briggs types for the traditional corporate world. (ISFPs and INFJs are the other types).

The corporate work world is antithetical in every way to INFPs.

The following are generalizations and should be taken as such since plenty of individual counter-examples are true:

Extroverts fit in better at large organizational workplaces, particularly at lower levels where things like chatting at endless workplace birthday parties are valued.

Introverts can and do very well as visionary big picture thinkers and deep problem solvers within organizations. But, they often struggle with corporate politics, face time, and cocktail parties.

Intuitive types are often the big visionary thinkers who do rise to the top of their fields. But, intuitive types often feel trapped, bored, and frustrated by the rules and red tape inherent in large organizations.

Thinkers are more naturally suited to large organizational culture because such cultures tend to be more head than heart-based. That’s a broad statement that likely captures the IBMs of the world better than the Patagonia’s. Nonetheless, there are still more old school Fortune 500 companies than upstart new way of doing business entities.

None of the traits individually creates much of a problem for those in large organizations. But, collectively, the combination of all four less accepted traits make the INFP too flakey, delicate, and sensitive for the highly structured workplaces.

Sean was not surprised at all. He told me that he had adapted his outer image to fit in with both his family (he had two older brothers who were “athletic frat guys”) and at his high school. Sean could fool most anyone into thinking that he was one of the guys. But, he never felt that way. The thought of continuing this act into the work world was making him sick.

When I directed him to areas of business such as marketing, web design, and the startup world, Sean was quite inspired. The test result seemed to give him permission to start exploring a different area business that would be more suited to him. Freed from focusing on finance, he decided to shift his energies toward marketing and thanked me profusely from saving him from career misery.

I also frequently use The Enneagram, a test that I find far more powerful in uncovering the core motivations of our career counseling clients. The complexity of the Enneagram requires a lengthy explanation. So, here, I will simply show its use in practice.

“Jane” was a thirty-five year old medical biller who was miserable in her work in the insurance industry. She never really understood why. She actually had a nice boss, good cohorts, and a reasonably nice company. Jane tested out as a Point 4 in the Enneagram system. The nickname of the Point 4 is the “Romantic.” There are many characteristics of Romantics but the most pronounced is an inner drive to feel “special.” Jane’s work as one of a multitude of medical billers made her feel anything but unique.

Jane had never thought of leaving her job because she didn’t feel that she had the right to do so. She had immigrant parents who valued hard work. She was told repeatedly that “work is called work because its not play”. She felt guilty whenever she thought about leaving work.

Jane felt liberated when she heard that she was “wired” in a way that made her current work ill suited to her. It was almost like learning the results of the career test gave her permission to search for happier work.  She is now working wonderfully well (happy and successful) in a fairly unique area of the health care system.