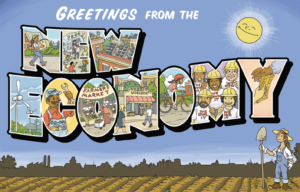 Jennifer left the workforce in 1995 to raise children.  Having graduated near the top of her class at Fairfield University in the mid-1980s, she had almost a decade of excellent work experience for several established Connecticut industrial companies.  In 2012, she contacted me and now laughs about her approach.

“I am going to reenter the work force and hope that you can help sift through various opportunities.”  Jennifer said, unaware that she sounded delusional.

Imagine if this was the 1960s and Jennifer – as smart as she is – was relegated to the few career paths that did not discriminate against women. Let’s say she was a legal secretary for 10 years and then took off 17 years and wanted to come back to work in the early 1980s.  Other than some mild adjustments to new typewriters and phone systems, she would quickly be able to get back to work.

I tried to gently educate Jennifer when she first called.  She was a bit dismissive – which she now apologizes for and said that her attitude stemmed more from insecurity than  haughtiness – and I politely suggested that she look elsewhere for help.

A few months later, she called in desperation.  “I get it.  You were right.  I didn’t want to believe you but I realize that I have to go through a process to rebuild my career.”

I mention now because Jennifer just sent a beautiful note about how happy she is in her new career path.