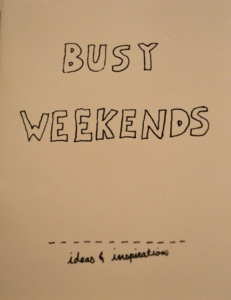 “I guess I’ll be painting the house, running errands, and driving my kids to activities.” Scott answered when I asked him what he would be doing this weekend.  He noted that the combination of home projects, shopping, and chauffeuring his children to activities – as well as watching them in their activities – was pretty standard fare for his weekend.  Scott had discussed weekend plans in relation to my questions about finding time for career exploration. Answers such as Scott’s – typical though that might be – are curious to me as a career guide.

Scott was not miserable enough to quit his job in middle management at an insurance company in Glastonbury, CT. He just had come to growing realization that he couldn’t believe that this was what he would end up doing for the rest of his life. Scott was in his late thirties. He thought he had his career figured out from his last move when he left a Hartford insurance company five years ago for his current one and saved himself an hour a day in commuting. He seemed to forget that he would be doing the same type of work.

Scott was philosophical, in part, because he saw 40 around the corner.  Having recently come from his 20th high school reunion, Scott had remembered all the big and adventurous goals he had for himself back then that were now forgotten in suburban monotony.

Scott knew he had to change but “didn’t have the time for career exploration.” Meeting me for a career counseling session was the most time he had invested in the process even though his wife had urged him for the last several years to figure out how to be happy in his career because he was increasingly grump at home and drinking more than seemed healthy.

“You have to schedule the time.” I told Scott.  “I’m certain that all of those errands and house work are not as important as your career. And, while as a father of three myself, I applaud your desire to watch your 5 year old play T-ball, you probably could spend some of that time reading/researching/reflecting/planning your career change.”

And, then we got to work.