Too skeptical for getting help with your career? 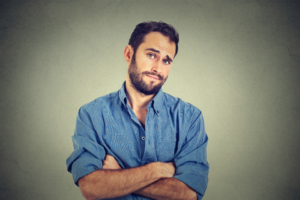 Most everyone who contacts Career Counseling Connecticut is terrific.  Those who are career seekers are usually people who are trying to make the most of their lives, my kind of people.  Many, of course, are in some ways dissatisfied with their work and even if I can make a suggestion or two informally, I’m happy to help.  That’s my purpose.  Most either know of me through their own trusted sources or feel they know me enough through either my books or blog.

But every now and then, I’ll have a bizarre interaction with someone who wants help – which is why they contacted me – but who immediately treats me like a telemarketer!  It’s odd.  I try to be patient but I’m thinking… “You called me.   I am booked solid with a large wait list and you are treating me like a salesman.”

“I was worried about contacting a career counselor because my friends told me to be careful,” Brendan, a young thirty-something from Middletown said.  As the discussion progressed, it became clear that Brendan took no risks in his career because of both his natural skepticism and his main influencers – his friends and parents, all of whom were described in different ways as overly cautious/skeptical/cynical.

Oddly enough, Brendan had been reading Career Counseling Connecticut’s blog for the last few years.  But, in his own words, he rarely steps out of the box and did not make the call. Fortunately, his girlfriend is from East Lyme, close enough where she knew many people who knew me, and convinced him to make the call.

As we discussed Brendan’s clearly mismatched career path, it became clear that his skepticism was preventing him from not only seeking happiness but also success.  I have written elsewhere but it is worth repeating: if you don’t like what you do, at some point, you will likely not be successful either.  You can only fake interest for so long.  In Brendan’s case, his complete boredom with finance had led him to fall behind his peers who were on the same career track; receive a written warning for not following company procedures; and then a poor review, which was the other impetus, besides his encouraging girlfriend, to contact Career Counseling Connecticut.

Why was Brendan in his career path? Because, years ago,  his influencers told him than the other path that he was considering was more risky so it didn’t make sense.

Brendan was beginning to understand that listening to skeptics did not make sense.